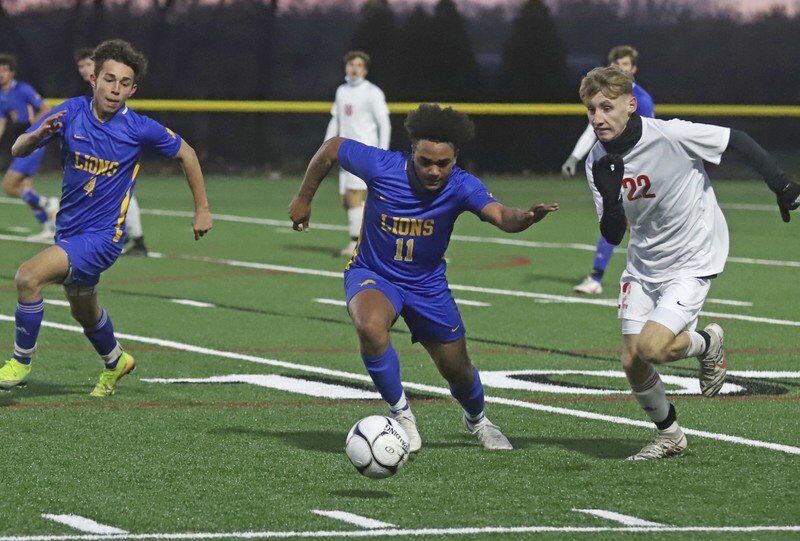 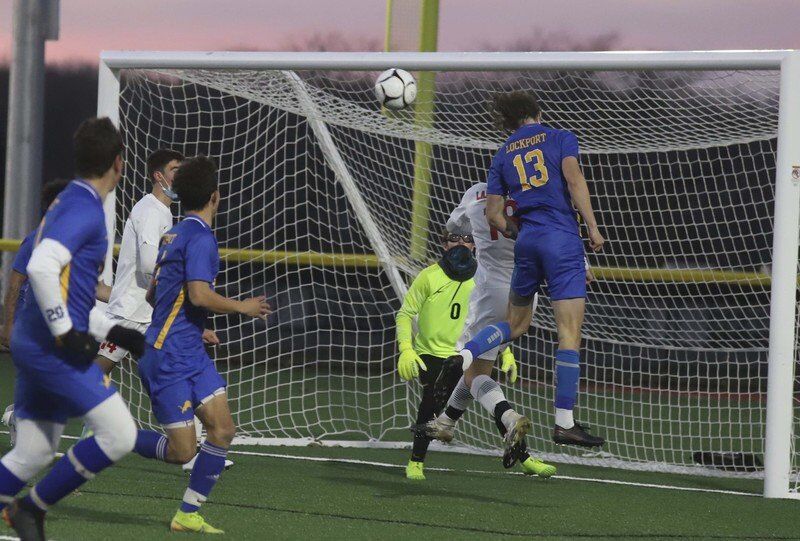 SANBORN — The Lockport Lions boys soccer team cemented themselves as one of the top teams in the area this fall. While their goal was to win a Niagara Frontier League title and a Section VI championship, the dream fell just short on both.

The No. 2 Lions were defeated, 3-1, by the feet of the No. 3 Lancaster Legends, in Thursday's Section VI Class AA semifinal matchup at Niagara Wheatfield High School.

Opportunities were slim-pickings for the Lions offensively, as the team couldn’t get much rolling. Despite the end result, the Lions played a physical brand of defense and made life tough for the Legends.

Lancaster got on top quick, as sophomore Tyler Kohl was in the right spot at the right time. Kohl took a pass out in front of an empty net and was able to boot it into the net. The goal in the fourth minute of the game gave the Legends a 1-0 lead.

That was the lone offensive output of the first half, as both teams had opportunities, but couldn’t find the back of the net. Lockport, despite trailing, led the shot on goal battle, 7-6.

Lancaster seemed as if it’d have more opportunities on breaks, but with Lockport playing defense tight up past mid field, several passes over the Lions defense to forwards were called offsides, canceling any offensive chance.

In the second half, Lockport had a chance to get on the board. Off a deflection less than 10 minutes into the half, the Lions had an open shot, but a bullet of a boot was stopped by the Legends keeper.

As the half went on, the Lions continued to play physically, and Lancaster continued to hold Lions opportunities in check.

With 9:57 remaining, though, Lockport's star senior Reilly Boyer took advantage of a penalty kick to tie the game at 1. The goal was Boyer’s 22nd of the season.

The tie didn’t last long though, as off a free kick, Kohl used his head for his second of the game, giving the Legends a 2-1 lead with six minutes remaining.

Then, just a few minutes later, Legends senior Josh Marinaccio added a goal to make it 3-1 Lancaster, putting the game freshly on ice.

The win puts the Legends back into the Class AA title game, where they look to defend their crown from a season ago.

For Lockport, their success story ends with a record of 11-3-1. The team was vying for their first sectional crown since 2005. Despite the result, Lions coach Jeff Hulshoff was proud of his team for the season they put together.

“It was more than a success. They played their hearts out all year long,” Hulshoff said. “The last two games we just fell a little short, that’s all.”

The loss is additionally tough, as the Lions will lose 10 seniors from this fall’s squad.

“They gave it their all. They gave it their senior go,” Hulshoff said. “You can see some of them are over there crying and stuff like that, because now they’re realizing, ‘This is it, we’re done.’ And they had a goal to win two championships and we fell short on both. It’s just one of those things.”

Despite the loss of seniors, Hulshoff added that he has a good core returning next year, and he hopes they’ll be back in the same spot in 2021.

As for every team, a lot has been demanded of players with COVID-19 throwing wrenches into everyone’s season. With that, Hulshoff said his team did a tremendous job taking all the punches that COVID may have thrown at them.

“The way these guys bounced back on hearing, ‘Oh, this game was supposed to be played, now it’s postponed because of COVID. Now, we have to go and redo it, and then we have to play four games this week and four games next week.’ And that’s what I mean, they kept on winning and winning and I thought it was fantastic. They answered the bell every single time,” Hulshoff said.

According to the Lions roster, eight players will return next season, including Hunter Coakley, who had three goals and seven assists this fall.

The Legends will face Williamsville North for the AA title on Saturday.