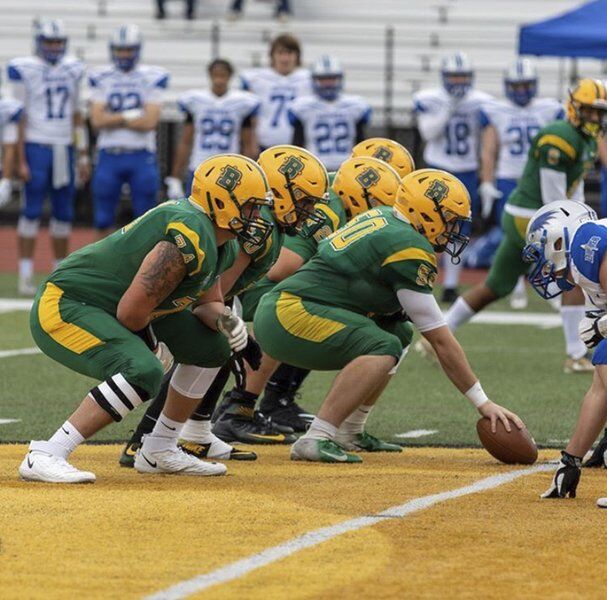 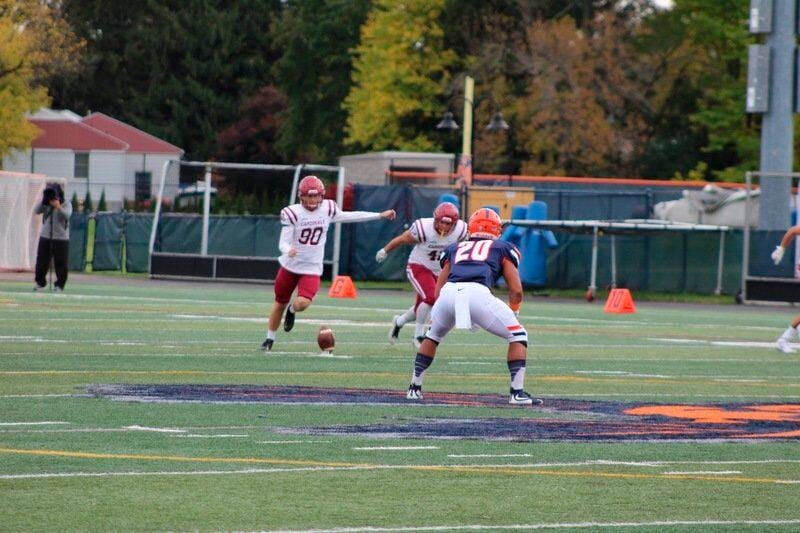 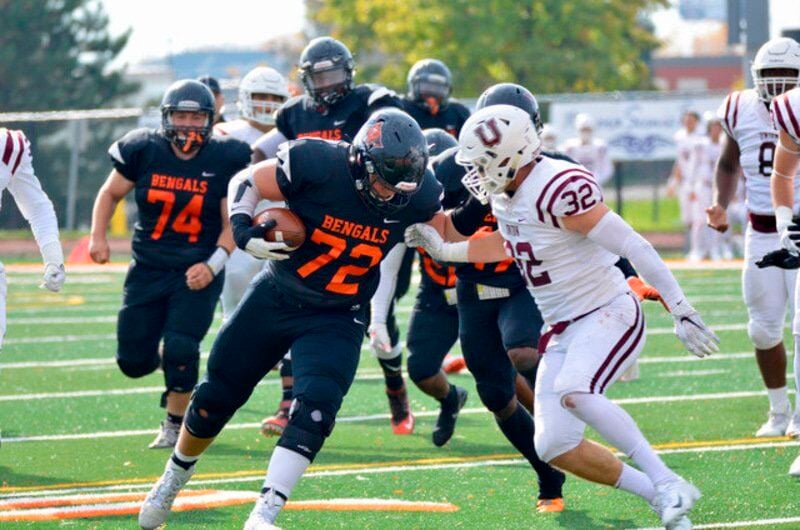 Tom Dupee/Contributed photoStarpoint alumnus and Buffalo State lineman Kyle Schreader (72) recovers a fumble and scores a touchdown in the Bengals’ Liberty League matchup with Union College on Oct. 26, 2019 at Coyer Field in Buffalo.

Tom Dupee/Contributed photoStarpoint alumnus and Buffalo State lineman Kyle Schreader (72) recovers a fumble and scores a touchdown in the Bengals’ Liberty League matchup with Union College on Oct. 26, 2019 at Coyer Field in Buffalo.

There may be some college programs prepping for a fall football season, but that’s far from the norm in 2020.

As September gets under way, many Division III programs were slated to kick off week one, with five games originally scheduled for today. But with the concerns over the coronavirus, myriad schools have punted on a fall season and kicked things back to the spring. As of Wednesday, only one D-3 game is scheduled to take off for week one when Castleton University travels to Plymouth State.

One of the student-athletes directly affected by the delayed fall season has been Buffalo State offensive lineman Kyle Schreader. Schreader has found success with the Bengals, as he was picked as a second team All-Liberty League offensive lineman last year during his sophomore campaign.

The Starpoint ‘18 alumnus found out the league’s decision to postpone on July 22 while working his summer job, leaving he and his teammates shook. This will be Schreader’s first fall without the gridiron since he was a seventh grader.

Now that the fall and spring are essentially swapping roles, Buff State and other D-3 schools will be looking to use the fall as a spring-like season with practices and workouts.

“What we’ve been told is that we start practices on Sept. 9, (next) Wednesday,” said Schreader, who was a 2017 first team All-Western New York selection. “They’re putting us into 10-person pods by position for like 50 minutes.”

Although he briefly considered taking a year off, Schreader decided to stick things out because he’s on course to graduate on time. Also factoring the extra year of eligibility student-athletes will be receiving, the rising junior will be able to use his fifth year while working on his master’s degree.

The problem, however, is wether the spring season will even happen. The reality of moving things over to the spring means underclassmen will be tasked with playing two football seasons in a calendar year. Even if spring football does come, it raises the question of how will the 2021 fall season be affected.

Schreader detailed another scenario that has come about due to the delayed fall; several of his rising-senior teammates had to withdraw from school to be able to save their last semester in order to play in 2021. Two of them were down to their final course, meaning they must wait until January to get their last class credits under way.

Sal Gioeli is another former Section VI o-lineman at the D-3 level, as he’s been a member of Brockport’s two latest Empire 8 championship teams during its three-year run as conference winners. A two-time all-league selection for Barker/Royalton-Hartland, Gioeli was just picking up steam last year, making starts at right and left tackle in three of the Golden Eagles’ last four games.

Gioeli also got his first taste of the postseason, contributing to Brockport’s win over Western New England University in the first round of the 2019 NCAA Division III Football Championship.

Although the COVID-19 lockdown withheld Gioeli from getting into any gyms, he was able to train with some workout equipment at home. That was the perk of being back in WNY from spring break until August, though most of his teammates didn’t have that luxury.

Gioeli may have broken into the starting lineup last season, but he was looking forward to this year with the opportunity to be a full-time starter. But with no spring ball to completely sharpen his tools, Gioeli hopes to make up for lost time with the fall.

“Yeah it’s kinda rough, especially because I was really excited for that spring (training) to get better,” said Gioeli, whose E8 conference punted on all fall sports on July 15. “Get bigger, stronger, faster, and it kind of got cut short. And then going home with no gyms it made it that much harder. But I’m really looking forward to this season and then the next coming spring to really be where I need to be.”

Similarly to Schreader, Gioeli has several senior teammates whose football fate has been altered with no fall. Some have to pick and choose between playing their last season, going into the workforce or possibly delaying job opportunities for the future.

Fellow WNY native Joe Dotterweich is also a part of the E8, as the North Tonawanda ‘17 grad has been the starting kicker for St. John Fisher the past two seasons. Last year was his finest yet, as he went 10 of 16 on the year and took on duties as not only the place kicker and kickoff man, but as a punter as well.

The 2016 second team all-state and All-WNY pick netted 12 punts inside the 20-yard line and has also capped off each the past two seasons with game-winning kicks in the Cardinals’ final games.

Similarly to Schreader’s plan for a fifth year, Dotterweich is also in good position to come back around, as he’s staying at Fisher to complete his master’s in business administration.

Dotterweich has had a positive outlook on what a spring season would look like, even with possible wintery conditions. He’s holding out hope that another mild winter is in store as he relishes the opportunity to handle all of the Cardinals’ kicking duties once again.

Despite seeing the silver lining, Dotterweich will miss what a traditional fall football season brings.

“Honestly (I’ll miss) being around all of the guys on the team,” Dotterweich said. “(It’s) so much fun to just hang out with them and compete, seeing how much we are able to progress over the course of the year. Competition brings out the best in me and being able to do that with some of (my) best friends is amazing and I will certainly miss it.”

Follow sports reporter Khari Demos on Twitter @riri_demos. Also, be sure to listen to the ‘GNN Sports Podcast,’ on Spotify, Anchor, Apple podcasts and more.