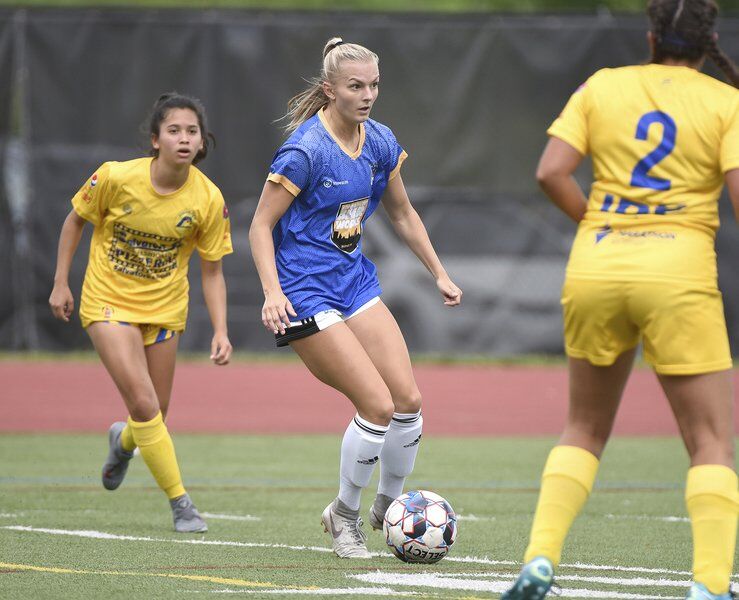 Marcy Barberic, the Grand Island grad and University at Buffalo star, controls the ball from her midfield position for FC Buffalo Women in a game Saturday against Rochester at All-High Stadium in Buffalo. 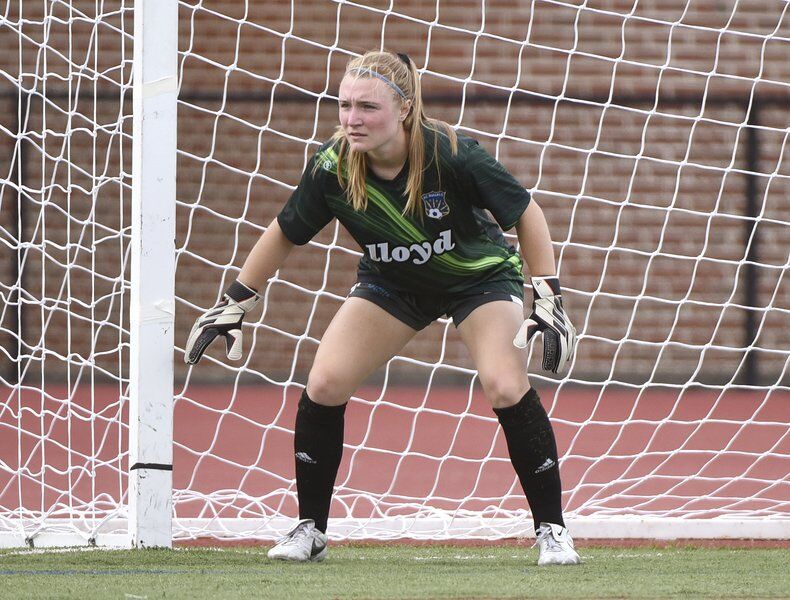 Goalkeeper Emily Kelly, a Wilson High School grad and University at Buffalo junior, defends the net for FC Buffalo Women in a UWS game Saturday against Rochester at All-High Stadium in Buffalo. 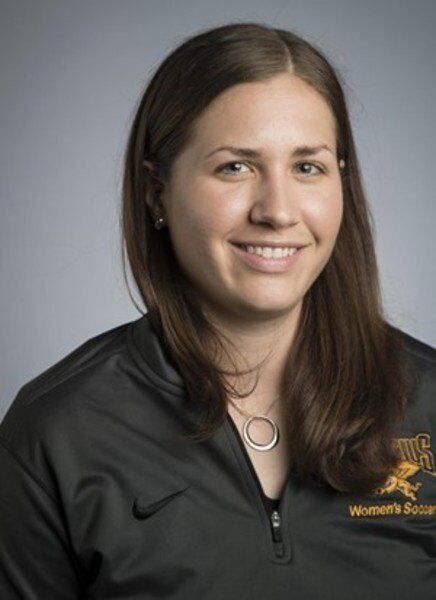 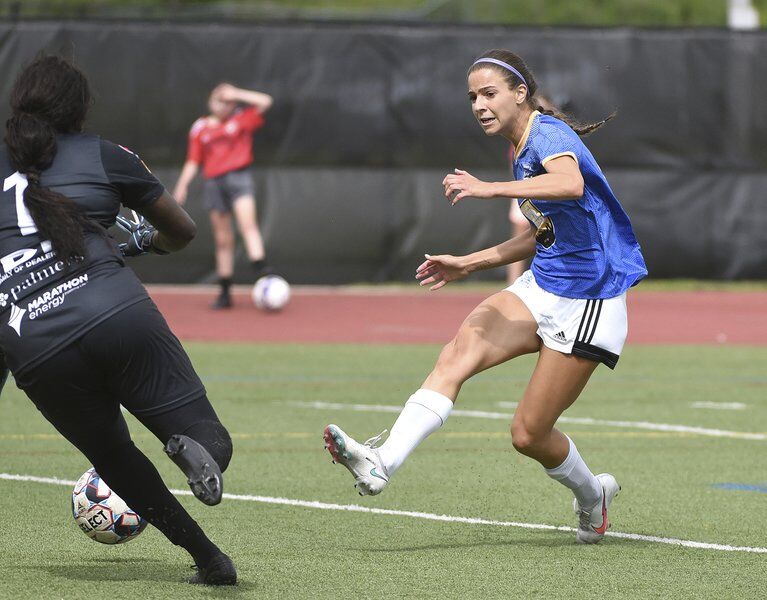 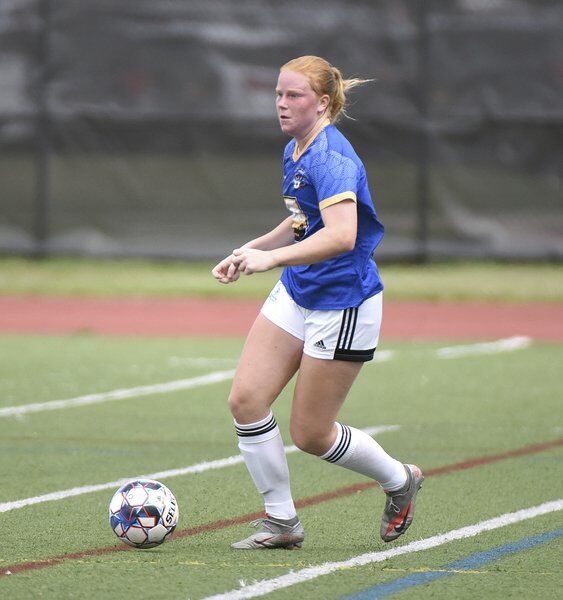 Marcy Barberic, the Grand Island grad and University at Buffalo star, controls the ball from her midfield position for FC Buffalo Women in a game Saturday against Rochester at All-High Stadium in Buffalo.

Goalkeeper Emily Kelly, a Wilson High School grad and University at Buffalo junior, defends the net for FC Buffalo Women in a UWS game Saturday against Rochester at All-High Stadium in Buffalo.

Before any other other coaches and players on the FC Buffalo team arrived at the final training session ahead of this weekend’s United Women’s Soccer regional playoffs, Gabrielle Wilson was running laps around the track at Buffalo State’s Coyer Field.

“I have to fit in my training outside of our practice,” said Wilson, the former Niagara University goalkeeper who now coaches the position for both of the area’s semi-professional soccer clubs. “When we are in practice, I have to focus on these guys, getting them ready. Though with our goalie situation, I have been jumping in to practice lately.”

That goalie situation could put Wilson back in the net competing above the recreation level for the first time in a decade since her senior season as a Purple Eagle.

In their first summer of existence, FC Buffalo won the 12-team East Conference with a 7-2-1 record and earned the right to host the four-team playoffs. FCB hosts the Lancaster (Pa.) Inferno at 7:30 tonight following a semifinal between No. 2 Syracuse and No. 3 Connecticut. Sunday’s 2 p.m. final at Coyer Field will determine which team advances to next week’s UWS national semifinals in Round Rock, Texas.

Emily Kelly, a Wilson graduate and keeper for the University at Buffalo, is FCB’s starter. But with schools starting their training in the coming weeks, Kelly and several other active collegians in the UWS will begin playing less in favor of being fresh for the fall season.

FCB’s other goalie, Canisius’ Jessica Jones, is injured, putting Wilson in a position that wasn’t there for her when she graduated from Niagara.

“There was nothing like this locally in the summer months when I was at Niagara,” Wilson said. “So it’s been really great having something here that gives college athletes, and those who are a few years out of college and still have that competitive drive, something that’s for your city and you can really watch it grow.”

FC Buffalo features current and former stars from UB, Canisius and Daemen, among other colleges, but leading the attack has been recent Niagara graduate Kelsey Araujo, who ranks among the league’s top scorers with eight goals and seven assists. UB’s Marcy Barberic (Grand Island) is second on the team with six goals.

“It’s been an awesome experience,” Araujo said. “Playing with a bunch of girls I competed against for five years, it’s been fun seeing a different side of them. Everyone is so positive and it’s a great environment to be in that helps you thrive on the field.”

The game atmosphere includes the club’s enthusiastic fanbase, The Situation Room — honoring the men’s team’s namesake, UB grad and CNN anchor Wolf Blitzer — chanting to a drum beat for the duration of the game.

“We have the best fans,” Araujo said. “We’ve traveled to other stadiums and they are nowhere near us. It’s way different than anything we experience in college.

“It’s great to see a community coming together and being so supportive of this women’s team. We’ve seen them do it for the men, so it’s nice that they do it for the women as well. It’s nice to feel appreciated and valued, and to give young female athletes something to look up to.”

Among those looking up to the team veterans are two players who just finished their high school careers, Brigid Molloy, an All-American for Nardin Academy, and Erin Weir, an All-WNY and third-team all-state performer who last fall led Niagara Wheatfield to its first Niagara Frontier League championship in 32 years.

After missing two games to finish playing for the WNY Flash travel team, Weir has started every match on defense for FC Buffalo Women.

“She’s been phenomenal,” head coach Nikki Bartholomew said. “Her role on her youth team has been defensive, and that’s what she’ll do for us this weekend. But she is definitely a threat on the offensive side of the ball. And she’s a true lefty, which is very helpful.”

On her way to Canisius, Weir was eager to start building chemistry with some of her new teammates while competing at a higher level outside her age group.

“Playing against older girls definitely pushes me to play my best all the time,” Weir said.

Wilson might find herself pushing her younger teammates while backing them up in the most important games of the season.

“If Gabe steps in, I have full confidence she will keep us in games,” said Bartholomew, a former UB standout who played for the Rochester Lady Rhinos in the W-League. “And she will be a vocal leader for us out on the field.”

A member of the FC Buffalo women’s soccer advisory board, Wilson had to give up her volunteer NCAA coaching position in order to coach collegians in the summer. Wilson, who puts her MBA from Niagara to use as an accountant for Pegula Sports & Entertainment, was especially intrigued when FC Buffalo owner Nick Mendola presented the opportunity to break down a gender barrier.

“Gabe has enormous respect from the players, knows the game like a head coach, and her attention to detail is exceptional,” Mendola said. “Our club has been open to all qualified coaches and we are fortunate she chose to work with both the men and women.”