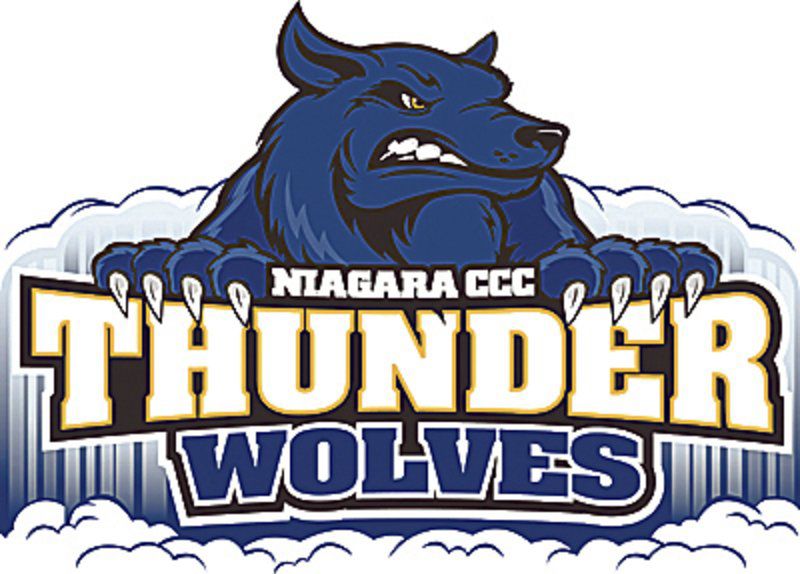 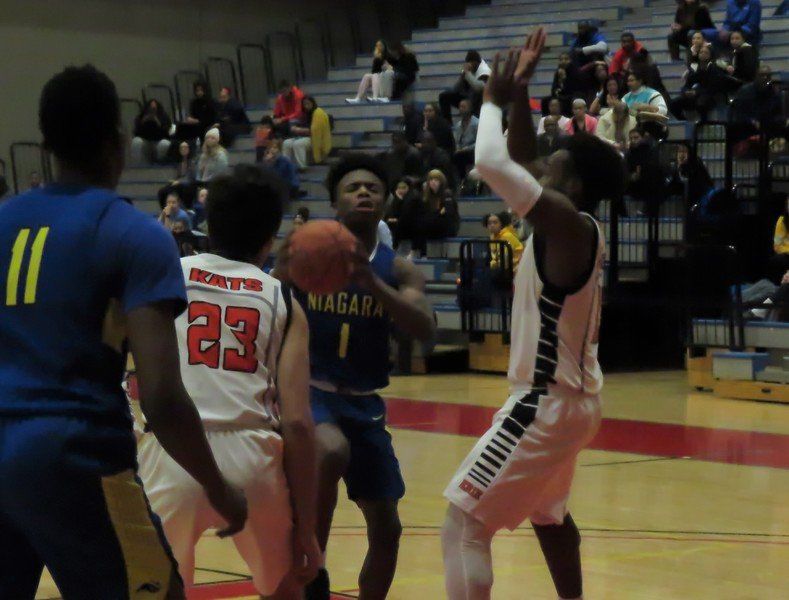 David Yarger/ContributorNCCC’s Raymond Specht goes into the lane in the Thunderwolves ranked matchup with ECC, Wednesday in Buffalo.

David Yarger/ContributorNCCC’s Raymond Specht goes into the lane in the Thunderwolves ranked matchup with ECC, Wednesday in Buffalo.

In the opener, the No. 12 ranked NCCC women’s team was in control from start to finish, as the Thunderwolves ran over the Kats, 79-39.

The finale highlighted the No. 9 ranked ECC men’s squad versus the No. 13 ranked men’s team of ECC. In the battle of highly ranked NJCAA D-II teams, the Kats defeated the Thunderwolves, 93-87, in overtime.

The ladies led by as much as 36 points in the first half and 45 in the second half, as the Thunderwolves defense made things near impossible for the Kats.

In the second half, offense came to a halt and both teams played a more physical brand of basketball. Regardless, the Thunderwolves were well ahead and finished as the victors.

Offensively, Harrison led the Thunderwolves with 22 points, while Nickelle O’Neil and Emborsky added 16 and 14, respectively. Also, points off turnovers were crucial, as the Thunderwolves turned steals into 45 points.

NCCC was able to start with a 31-6 lead — something Coach Nate Beutel said was one of the team’s five keys to victory.

“We executed that to a ‘T.’ Our full-court pressure I knew would give them trouble. We’ve seen them live a few times this year, and we’re quite a bit quicker than them, so we were able to use our speed and athleticism to turn up the pace,” Beutel said.

Beutel compared the Thunderwolves’ pressure to that of an old-school Niagara Falls High School full-court pressure that would create steals and get buckets in return.

The Thunderwolves, now 23-1 on the season, have won five-straight contests since their lone loss, Jan. 18, versus Monroe Community College. Since then Beutel said his team has had a revitalized focus during the five-game streak.

“They really responded well to that loss,” Beutel said. “The next day, we beat last year’s NJCAA runner up at Division-II Union. So for us to have the kind of maturity to respond was huge in my eyes. Ever since then I thought we’ve been doing a much better job of executing the game plan and remaining a little more focused. We lost our focus a little bit in the second half of that Monroe game, where I think the tides have turned now over the last few weeks, where I think we’re trying to make ourselves the best version of NCCC women’s basketball.”

In the nightcap, both teams based their games off runs.

NCCC began with a 10-2 lead, before the Kats came back to take a lead.

As momentum was swinging towards ECC, up 21-17, NCCC’s defense picked up the pressure and the offense began to convert. The Thunderwolves went on a 17-2 run to take a 34-23 lead, highlighted by an alley-oop slam from former Amherst-standout Marcellus Cooper.

Despite momentum sliding in NCCC’s direction, the Kats charged back with a 12-4 run. The run cut the Thunderwolves’ lead to four, 39-35, at the break.

After the first 20 minutes, Cooper led the Thunderwolves with 13 points, while ECC’s leading scorer Ladji Fofana had a game-high 20 points. Additionally for NCCC, Nigel Scantlebury had eight points and David Petit-Homme netted six.

Both teams also struggled in the first 20 minutes from behind the arc, shooting a combined 5-24 from 3-point land. That narrative changed in the second half, though, as the first nine points of the half came from treys.

Late in the game, NCCC found themselves down 76-69. The Thunderwolves converted two-straight layups, got a steal and a three from Scantlebury to tie the game at 76, then William Kondrat converted a Scantlebury steal into a layup for a 78-76 lead.

The lead went back to ECC, though, seconds later, as Ahamadou Fofana nailed a trey to take a 79-78 lead.

On the ensuing possession, Hunter Anderson made a 2-point bucket to give NCCC an 80-79 lead. The next possession on defense, the Thunderwolves drew a charge to get the ball back with 17 seconds left. Scantlebury went to the line and made one of two.

The one miss costed dearly, as Fofana nailed a 2-point jumper with seven seconds left to tie the game at 81. NCCC’s final shot at the horn was no good, and the game went into overtime.

In the extra session, the Kats would win it at the line, nailing eight free throws and two field goals. Despite a comeback, the Thunderwolves fell short to the nation’s No. 9 squad.

Offensively, Scantlebury led the way with a game-high 26 points, while Cooper added a double-double with 21 points and 10 rebounds. Additionally for ECC, Ladji Fofana led with 25 points, while Ahamadou Fofana added 22.

Despite the defeat, NCCC Coach Bill Beilein was pleased with the team’s effort to come back from down seven points with under two minutes to go.

“We changed our defense up and gave them a little different look to turn them over and we were able to get multiple points in transition off of it. … Tribute to our guys for not giving up,” Beilein said.

The loss is also makes it another year where ECC has knocked off NCCC in the rivals’ first matchup of the season. The last two years, though, the Thunderwolves have defeated the Kats in post season play. For the next matchup, Beilein said the team needs to do a better job “not fouling as much,” as NCCC accumulated 42 fouls Wednesday night. Additionally, the coach said the team just needs to do a better job making plays.

The second half comeback would be for not without Scantlebury. Eighteen of the guard’s 26 points came in the second half and overtime, which helped the Thunderwolves pull closer when ECC looked to put their stamp on the game.

“It’s his competitiveness,” Beilein said. “He’s that type of kid you could put the ball in his hands, because he doesn’t make a lot of mistakes and you can trust his decisions. The more it’s in his hands, the more good decisions are getting made and the better we’re going to look.”