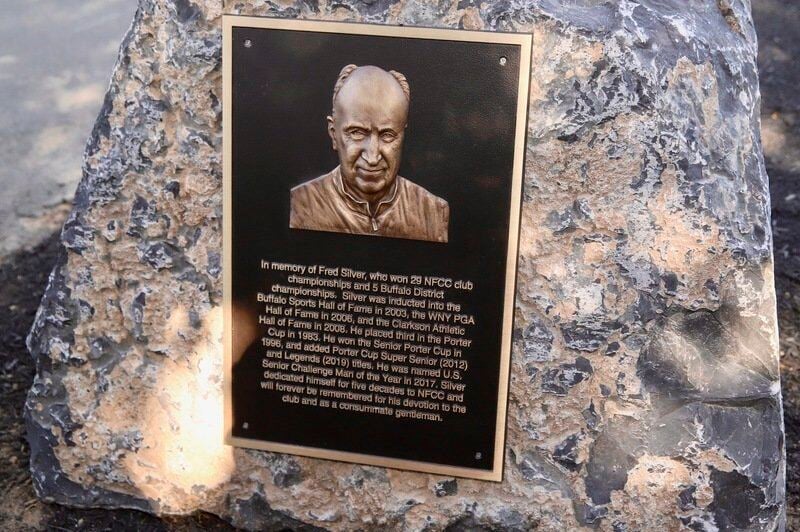 A plaque was unveiled Tuesday at the first tee at Niagara Falls Country Club in honor of the late Fred Silver, the backbone of the Senior Porter Cup. 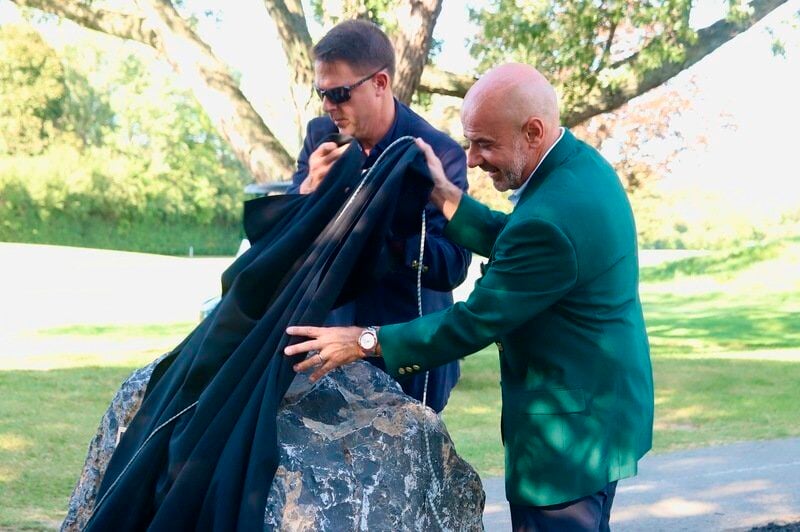 From left, Tim Engel, Niagara Falls County Club general manager and CEO, and PJ Alterio, co-tournament director of the Senior Porter Cup, unveil a plaque at the first tee Tuesday to honor the late Fred Silver, who helped the Senior PC become an annual draw for the nation's top competitors.

A plaque was unveiled Tuesday at the first tee at Niagara Falls Country Club in honor of the late Fred Silver, the backbone of the Senior Porter Cup.

From left, Tim Engel, Niagara Falls County Club general manager and CEO, and PJ Alterio, co-tournament director of the Senior Porter Cup, unveil a plaque at the first tee Tuesday to honor the late Fred Silver, who helped the Senior PC become an annual draw for the nation's top competitors.

It was a bittersweet Tuesday at Niagara Falls Country Club. For the first time in its history, the Senior Porter Cup will tee off without the man who not only kept it going but expanded it into one of the nation's top tournaments for players 55 and older.

Family, friends, club members and many of the players entered in this year's tournament watched as an eye-catching memorial in Fred Silver's honor was unveiled.

The plaque, designed and created by Tony Martin Awards in Buffalo, bears a striking likeness of Silver and is mounted on a large decorative boulder on the north side of the first tee between converging cart paths.

The inscription in gold lettering on a black background recounts some of his many accomplishments on the golf course.

With Fred's wife, Connie, and daughters Dena, Carolyn and Julie watching, his son, Dave, read it for all the hear.

In part it says, "In memory of Fred Silver, who won 29 NFCC club championships, five Buffalo District championships. Silver was inducted into the Buffalo Sports Hall of Fame in 2003, the Western New York PGA Hall of Fame in 2006 … He placed third in the 1983 Porter Cup ... He was named the U.S. Senior Challenge Man of the Year in 2017. Silver dedicated himself for five decades to NFCC and forever to remember his devotion to the club and a consummate gentleman."

Dave punctuated the emotional moment with his cup raised high and a shout, "To my hero. Cheers!"

While his accomplishments on the golf course are notable, Silver's most impressive legacy is the tournament he retrieved from the trash heap in 1992. The senior event had been dormant for 12 years, the remnants of what was originally called the Harvey Cup that began in 1978, named for Porter Cup founder Dick Harvey. It lasted three years.

For a long time, Silver squeezed 24 players into the men's tournament, the seniors essentially an afterthought with the college players and mid-ams on center stage.

Fred consistently said he could compose a field with four times as many seniors and in 2008 the present standalone event made its debut with 54 holes scheduled shortly after Labor Day.

He won the 1996 Senior championship and added the Super Seniors in 2012 and the Legends in 2019, a month before he died.

He played in 25 Porter Cup tournaments, the first time in 1970 and a year later he won the first of his 29 men's club championships. He finished in the Porter Cup top 10 four times and came close to winning it in 1983.

That was the year one of the largest galleries in history flooded the course and at one point in the final round Fred had to wait on the 15th green where 13-year-old Dave struggled through the masses to hand him his putter.

The transition to the post-Fred Silver era begins today. There will be 84 players competing in four divisions when the 32nd annual tournament tees off. The size of the field is similar to the past, but is missing a significant contingent.

"We lost a lot of the Canadians because unfortunately they couldn't get over with the restrictions at the border," Dave Silver said. "But we have a couple. We have Dave Bunker coming here. He played in the Senior Amateur in Detroit and lost in the quarterfinals. And Rob Cowan, who is coming over in a helicopter. He's a good player and he just won an event at my uncle Mike's place over in Highland (Country Club in London, Ontario)."

Not having them back "is kind of a bummer," Silver said. "And Gene Elliott (the 1998 Porter Cup men's champion who won the U.S. Senior Amateur last week) is representing Iowa in the U.S. Four-Ball. So we're a little thin at the top but still pretty good."

Former Buffalo Sabres goaltender Don Edwards (Bonita Springs, Florida) will play in the Super Seniors after finishing 13th in the Seniors in 2019.

The Super Legends (75 and older), which made its debut in 2019, will have six players. Steve Wilson (Solano Beach, California) is back after a runner-up finish to Skip Snow.