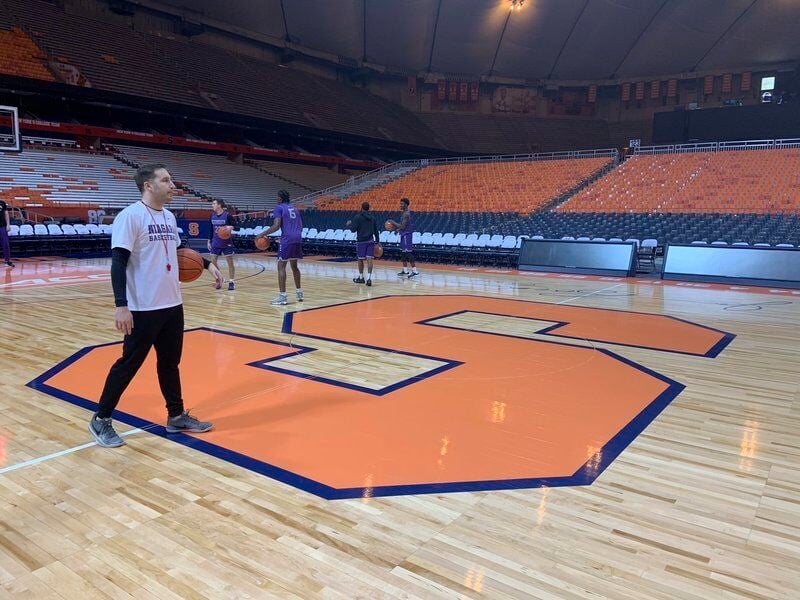 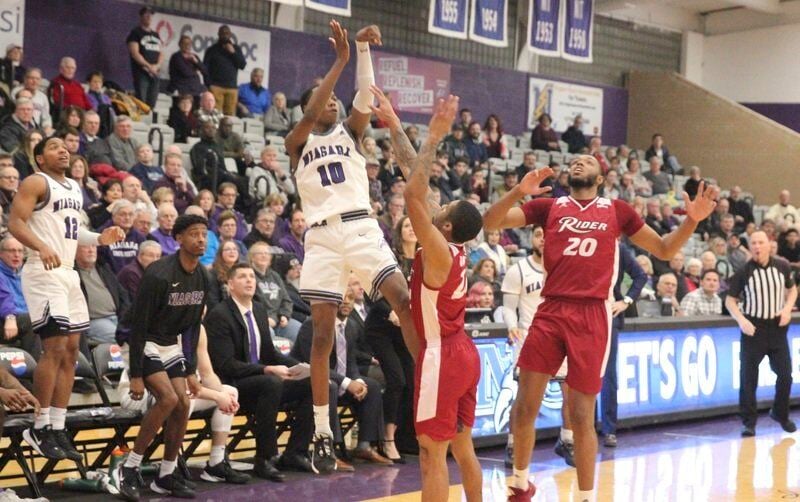 EJ Johnson/contributorIn this Jan. 17 file photo, Niagara sophomore Marcus Hammond fades after launching the game-winning shot just ahead of the final buzzer in a 70-68 win over Rider at the Gallagher Center.

EJ Johnson/contributorIn this Jan. 17 file photo, Niagara sophomore Marcus Hammond fades after launching the game-winning shot just ahead of the final buzzer in a 70-68 win over Rider at the Gallagher Center.

Barring a last-minute positive COVID-19 test, or some other act of God, the Purple Eagles will tip off the 2020-21 season tonight in Syracuse (8 p.m., ACC Network Extra), one week after play officially opened around the country on Nov. 25.

Their first opponent will be the mighty Orange, a return home for NU coach Greg Paulus for the second straight season. But whether it was Syracuse or Sacred Heart, this first game is certain to be a release for the Purple Eagles after over eight months with just a few weeks of basketball. NU only returned to practice early this week after suspending athletic activities Nov. 9 due to a coronavirus outbreak on the NU campus.

“We haven’t played a game since the second week of March,” Paulus said Tuesday during a media Zoom call. “And so, for us to be able to practice a couple weeks, be up on a pause and then have a little bit of time here before Thursday, I think that there certainly is a level of excitement.”

Paulus is sure there’ll be no lack of energy in his team, but beyond that, what he’ll see on the court tonight remains a bit of a mystery. In a normal year, programs end the season in March or April and cool off for a short period before resuming workouts during the spring semester. Players head home for a break in May before returning to school for the summer session, taking classes and working out as coaches truly begin to prepare for the upcoming season.

The pandemic cost Paulus, who took over NU just a few days before the 2019-20 opener after the surprise resignation of Patrick Beilein, his first true offseason leading the program.

“We want to have that excitement and play with great energy, enthusiasm, togetherness. But we also want to make sure that we’re passing and catching in the right spot, staying true to our fundamentals and principles,” Paulus said. “And with such a short window to try to develop those things, I think that this is going to be a great opportunity to compete against a terrific program, terrific talents, and then for us to be able to just kind of see where we are and see where we can grow.”

One thing Paulus does have going for him is a strong group of returnees. Niagara only lost one key player from last season — graduated guard James Towns — and returns 83.9% of its minutes played and 79.6% of its points scored.

The Purple Eagles should improve on their greatest weakness from last season, rebounding, with the additions of Kobe Nwandu, Touba Traore and possibly Jordan Cintron. The 6-foot-6 Nwandu followed Beilein to Niagara from Division II Le Moyne and sat out last season as a redshirt. Traore, a freshman from Mali via Virginia, is immediately NU’s most imposing player at 6-11. Cintron, an athletic 6-8 transfer from Longwood, could provide Paulus will all sorts of versatility, though the coach said there was no news of an eligibility waiver from the NCAA that would keep him from having to redshirt this season.

Still, with the lack of practice time, it will take some time for everything to come together.

“It’s been a balancing act for us trying to make sure that we’re getting our skills better while developing our chemistry, while building on the things that not only will hopefully give us an opportunity for the first couple weeks, but also down the road throughout the season,” Paulus said.

Paulus said his group “learned a lot about ourselves” from last year’s Syracuse game, a 71-57 Orange win, as well as the rest of Niagara’s non-conference slate.

As of Tuesday, NU had not scheduled any other non-conference games for this year, though Paulus said not for a lack of effort. Ideally, the Purple Eagles will get a few more games in before opening MAAC play.

“It changes every day,” Paulus said. “We meet about it every day as a staff to not only see where our program is, but other programs and try to connect the dots following state guidelines, university protocols, but also at the same time trying to give us an opportunity to compete before we’re able to get to that Dec. 11 conference date at Saint Peter’s.”

COVID-19 isn’t the only thing threatening tonight’s game. The Syracuse women were scheduled to host D-2 Lincoln on Wednesday in the first night game under the new roof at the Carrier Dome, but the game was turned into an exhibition and moved to a practice facility, the Melo Center, when officials noticed some water on the court at the Dome.

Syracuse officials said the move was made “out of an abundance of caution.”

“We are in the final stages of the roof construction project, which includes spot sealing the roof,” the university said in a statement. “We look forward to quickly resolving this issue for tomorrow’s men’s basketball game.”