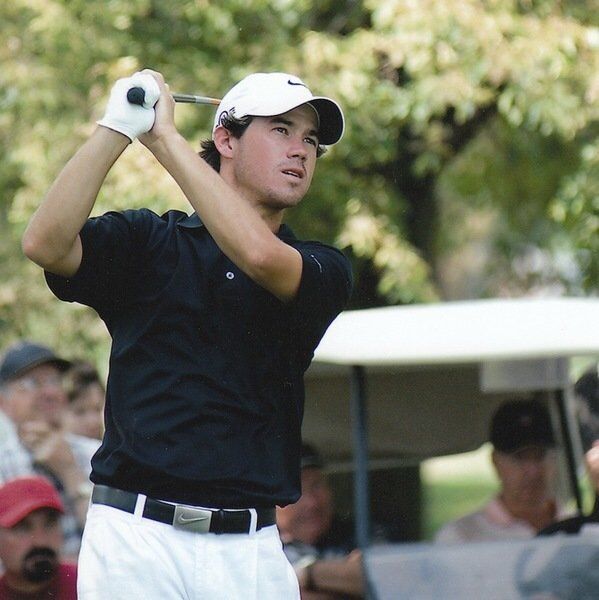 Brian Harman watches his tee ball on the 11th hole in the final round of the 2007 Porter Cup at Niagara Falls Country Club. He birdied 26 holes in the four rounds as he set a record with 22-under 258. 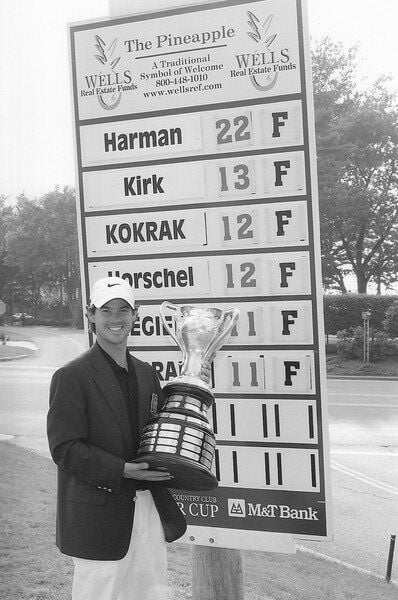 Brian Harman shows off the Porter Cup in front of the leaderboard at the 18th hole after winning the 2007 tournament with a record 22-under 258, beating the previous mark by eight strokes.

Brian Harman watches his tee ball on the 11th hole in the final round of the 2007 Porter Cup at Niagara Falls Country Club. He birdied 26 holes in the four rounds as he set a record with 22-under 258.

Brian Harman shows off the Porter Cup in front of the leaderboard at the 18th hole after winning the 2007 tournament with a record 22-under 258, beating the previous mark by eight strokes.

THIS IS the third of four stories in a series celebrating the tradition of the Porter Cup which has been played every summer since 1959. The 62nd tournament would have been played this week at Niagara Falls Country Club but was canceled because of the coronavirus.

Walker Cup years are special, especially for the best amateurs in the United States who are fortunate enough too be chosen to represent the nation against the best Great Britain and Ireland have to offer.

So it was no surprise that the 49th Porter Cup in 2007 drew one of the strongest fields in its history, if not the strongest. The tournament was one of the last opportunities for the prime contenders to showcase their skills before the USGA Selection Committee filled out the U.S. roster.

Somewhat overlooked was Brian Harman, at 18 the youngest player ever to compete for the U.S. Walker Cup team in 2005. He won two of his three matches and halved the other as the Americans won for the first time in eight years in the biennial matches.

This would be the first Porter Cup for the University of Georgia junior. He had been named a PING Second Team All-America in his freshman and sophomore years. That was no surprise given he had been regarded as one of the best junior golfers in history. He was named the 2003 and 2004 Rolex Player of the Year by the American Junior Golf Association, joining Tiger Woods, Phil Mickelson and Tracey Phillips as the only two-time winners.

The week before the Porter Cup, Harman played in the Southern Amateur and made a change to his game that led to a 66 in the final round. He had been struggling with his putting so he went back to the belly putter and continued to use it in the Porter Cup.

“When all else fails, go for the belly,” he said. “I was trying all kinds of stuff, the split grip with the short putter for awhile, the conventional, cross-handed, everything.”

He was hoping to make the Walker Cup team again, but he knew he had to play well in the Porter Cup to grab the attention of team captain Buddy Marucci, who was also playing in the tournament.

“Buddy is a friend of mine, but I’m not here to impress him,” Harman said. “I’m just here to play good golf.”

Harman thought there was a perception that his game was not living up to expectations, but after a second-round 63 in the Porter Cup he said, “People forget that I was ranked No. 1 (junior player) before I got into college, so I have been here before. I know how it works.”

What was working right away at Niagara Falls Country Club on opening day was his newfound confidence in his putting game, thanks to the longer shaft of the belly putter. He raked the course for a 6-under-par 64 for a one-stroke lead over mid-amateur Mike McCoy.

Harman to this day admits he is a passionate player and has been known to lose his composure on the course. He noted that there were moments in the first round that he had a “couple of things go wrong” but was determined to keep his cool and not let anything get him down.

Adding a 63 in the second round gave him a three-stroke lead over Justin Regier, son of Sabres general manager Darcy Regier, who shot 62, two strokes off the course and tournament record set by Bill Haas in 2003.

Harman’s 13-under for 36 holes was only two strokes off the record set by Brandt Snedeker in 2003. He had eight birdies, four coming in the final six holes.

The red numbers kept coming in the third round, making it look as if he’d be decked out in the champion’s green blazer pretty soon. Harman added a 66 to his torrid pace, dropping to 17 under, a 54-hole record. Still, it was no romp as Lucas Lee of UCLA shot 64, launched by a 30 on the front nine, to trail by four strokes.

More ominous was Harman’s ever-present Southeastern Conference friend and rival Horschel, a first team All-America from the University of Florida with rounds of 66, 66 and 67. He was one of 31 players under par through 54 holes.

Tournament director Steve Denn flatly predicted midway in the third round that Casey Wittenberg’s 2003 record of 14-under par was going to be erased. Harman was solid in every phase of his game and had birdied 20 of the first 49 holes.

But there were no guarantees with 18 holes remaining, Denn said. He recalled that Snedeker was 16 under after 54 holes, led by five strokes four holes into the final round and stumbled badly with a 5-over 75 and finished fourth.

Harman was well aware he was on a record pace and said, “I feel like I’m in my own little world and I don’t think about anything but the shot at hand.”

As for the record? “That’s the goal in golf, to do things no one has done before.”

Harman was paired with Horschel and Lee in the final round, but there was little drama. Horschel reduced the deficit to five strokes through 12 holes, but Harman added six more birdies to his total on his way to a 65 and a 22-under 258. He birdied 26 of 72 holes, had only four bogeys and made it sound routine.

“Most of my rounds were easy,” he said. “Stay on the fairways, stay on the greens, putt for birdie on every hole.”

Harman beat Chris Kirk, a Georgia graduate and former All-America, by nine strokes, a record he shares with Jay Sigel and Ed Tutwiler.

Horschel, who tied for third at 12-under, enjoyed his round with Harman, even exchanging a fist bump with him after each stuck their shots on the green at 15. When it was over, Horschel gave Harman a bear hug.

“I didn’t even know Harman in junior golf,” Horschel said. “But when we got to college, we played tournaments together. We have fun. Harman’s one of my good friends and I wanted him to win because I want him on that Walker Cup team. I want him to be my partner.”

Harman made a case. “Winning by nine in one of the strongest fields has got to say something. So we’ll see. We’ll see if that’s enough.”

A lot would depend on how he played in the U.S. Amateur a month later at the Olympic Club in San Francisco. As it turned out, he shot 149 in 36-hole stroke play and missed the cut for match play by two shots. A month later, he watched from his Savannah, Georgia home as the Americans celebrated their Walker Cup victory in Ireland.

“I thought I had a good chance,” he said of a second Walker Cup tournament. “I had struggled coming to the Porter Cup. I thought I might make the team. But they had a good team and they won. It could have gone a bunch of different ways.”

ON TO THE PROS

In 2009, shortly after playing in the Porter Cup, Harman was selected for the team again, helping the U.S. to another victory. He turned pro that September and made his debut on the PGA Tour in 2012.

Harman, 33, has won two events on tour, the John Deere Classic in 2014 and the Wells Fargo in 2017 when he made a 28-foot putt on the final hole to deny Dustin Johnson a fourth consecutive victory.

Later that year, he tied for second in the U.S. Open at Erin Hills, Wisconsin. He shot 12-under par to finish four strokes back of champion Brooks Koepka, another Porter Cup player who was here in 2009 and 2011.

Harman put his name in the record book in the fourth round of The Barclays in 2015, becoming one of three pro players to have two holes-in-one in the same round.

It happened at Plainfield Country Club in Edison, New Jerse,y where he aced the third and 14th holes, the second one live on national television. He finished 2-under in a wild round that included three birdies and five bogeys. In the end, he tied for 30th.

The aces were costly. Harman carried on a golf tradition and bought drinks for everyone that night. No problem. So far, he has earned more than $16 million in nine years on the Tour.

During the COVID-19 shutdown of the PGA season in March, Harman turned to his other favorite pursuits — hunting and fishing near his home on St. Simon’s Island on the Georgia coast.

NEXT: A once-in-a-lifetime tournament as two NFCC players pursue the championship.

Bill McGrath is a former Gazette sports editor and author of the book, “Porter Cup Fifty Years.” Contact him at scoreboard@gnnewspaper.com.