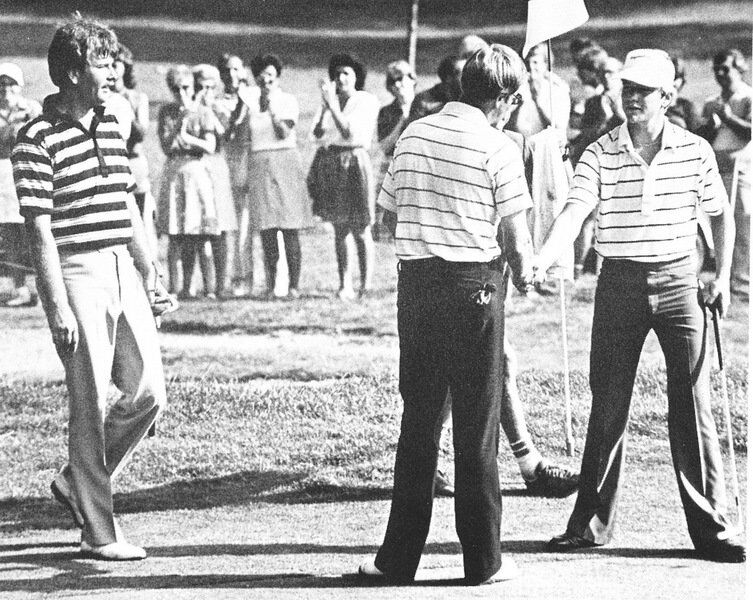 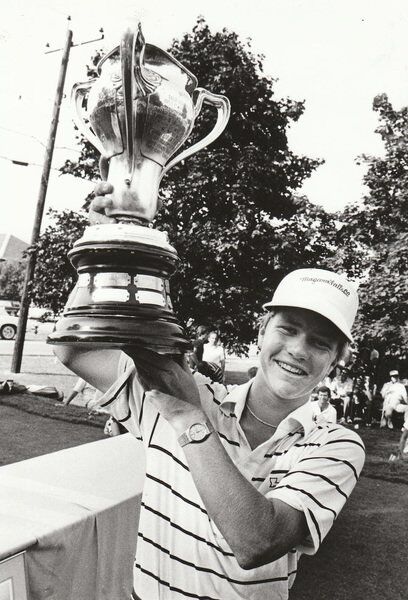 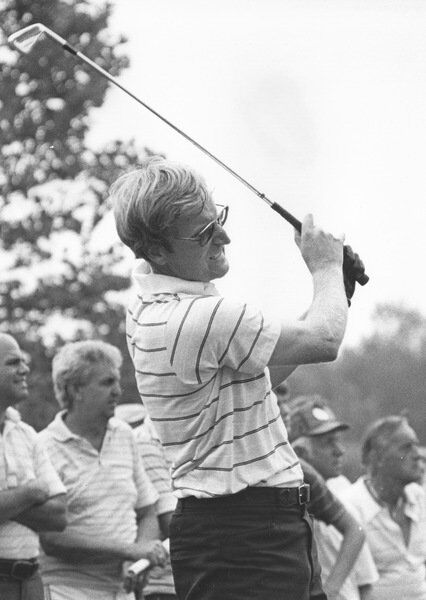 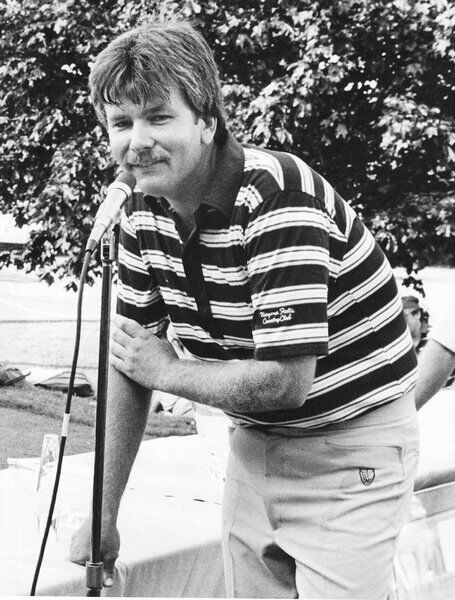 Mike Slipko takes the microphone to address the fans gathered for the awards ceremony following the 1983 Porter Cup at Niagara Falls Country Club. Slipko, a member at the club and the 1982 men's champion, finished second in a suspenseful challenge against Scott Verplank.

Mike Slipko takes the microphone to address the fans gathered for the awards ceremony following the 1983 Porter Cup at Niagara Falls Country Club. Slipko, a member at the club and the 1982 men's champion, finished second in a suspenseful challenge against Scott Verplank.

THIS IS the last of four stories in a series celebrating the tradition of the Porter Cup which has been played every summer since 1959. The 62nd tournament would have been played this week at Niagara Falls Country Club but was canceled because of the coronavirus.

In the 61 years of Porter Cup, there have been historic tournaments and moments to remember. Showdowns in the final round, championships blown on the final holes, nerve-wracking playoffs and surprise champions. The tournament has had it all.

But there is a once-in-a-lifetime tournament in the books and it came in the Silver Anniversary year, 1983. There was no way to know it at the time but the makings of this one had its origins in the Niagara Falls Country Club's men's championship tournaments. A rivalry between close friends, both talented players, had developed in the early 80s.

NFCC had two members whose skills were at a level matching or exceeding the talent of a lot of the Porter Cup players. And during this particular summer they were playing some of the best golf of their careers.

Fred Silver, 38, had played in every Porter Cup since 1970 and would win 29 club championships and six Buffalo District titles. This would be his 14th Porter Cup.

Niagara Falls native Mike Slipko, who played on the pro tour briefly in the 70s, joined the club in 1980 and had dethroned Silver for the men's championship in 1982, ending the latter's nine-year winning streak. Slipko, 34, had played in seven Porter Cups going into 1983 and had tied for sixth in 1982.

A rivalry between the two was inevitable.

"I first met Fred when he was playing in the Industrial league matches at Hyde Park, where I played, in the mid-60s," Slipko wrote in an email. "We were competitive, absolutely, but that didn't really develop till 1980, when we moved back from the Los Angeles area, where we settled after my short run on tour. In 1980, we joined NFCC, then our rivalry/friendship blossomed."

Tuten made four birdie putts ranging from 25 to 60 feet for a 66 and a one-stroke lead over Verplank after the first round. Silver was tied for third at 68 and Slipko tied for eighth after a 69. The fun was just beginning.

The drama began to shape up in the second round when Silver added a 69 to his opening 68 to trail Verplank, playing in his first Porter Cup, by two strokes. Slipko posted his second consecutive 69 and was alone in fourth at 138.

Verplank, entering his sophomore year at Oklahoma State, had turned 19 less than three weeks earlier. It didn't take him long to figure out a golf course he had never played before. Accuracy was the key on the narrow fairways and small greens.

"What I remember most were the crowds that day! Biggest ever, cheering Fred and I on, every shot," Slipko recalled in his email. "Warming up before the round on the practice tee, Fred and I knew we had our hands full, all we wanted was to play well, put some pressure on his game, and make him play his best to beat us. We wanted to play our best, to support the crowd and let them know how much we appreciated their supporting not only us, but the Porter Cup."

"I was excited," he said in 2003, the year he was inducted into the Greater Buffalo Sports Hall of Fame. “I couldn’t sleep very well and I went out to the course about 8-8:30 in the morning to hit some balls. I had all sorts of nervous energy. The members were excited about me and Mike in the final group. I was just trying to kill time. I wasn’t going to tee off until one o’clock.”

His energy contributed to a shaky start, a bogey at the first hole and a difficult putt to save par on the second. "I was so excited and charged up. Then I settled down and birdied the fourth hole. I shot a 34 on the front, but I could have been out of it early.”

After making his birdie on the fourth hole to boisterous cheers, Silver overheard Verplank say to his caddy, “Boy, I’m really in a battle here.” But Silver said he never saw the slightest indication their young opponent would crack under the pressure.

"I knew it would be that way against Fred and Mike," Verplank said, referring to the local support after the tournament. "It didn't hurt me. In fact, it fired me up at times. … I wanted to shoot 68 and concentrated on doing that. If I could be 5-under for the tournament, I knew I would win."

The game was slipping away gradually for Silver, who had buried his second shot at 14 in a bunker, didn’t clear the rough with his third shot, bogeyed the hole and essentially lost any chance of winning. He also momentarily lost his 13-year-old caddy-son, David, a short time later.

“He couldn’t get through the crowd at 15. I was standing on the green waiting for my putter,” Fred remembered.

Slipko kept the pressure on his college rival and finally caught him at the par-4 15th, holing a birdie putt. With the 15th, 16th and 17th holes clustered and the crowd several rings deep, the roar when Slipko made the putt was the loudest of the day. Jay Townsend, teeing off at the 17th hole, said he nearly whiffed, the sound startled him so much.

Verplank tapped his par putt, watched it lip the hole and drop in, defying the odds and leaving an expression of relief on his face.

"When he made his downhiller, it shook me, I lost my composure and concentration, which I didn't expect," Slipko noted in his email. "It was a straight uphill putt, and I stroked it well, but it lipped out. All the momentum shifted his way."

Down by one, Slipko thought he still had a chance. But Verplank tamed the most challenging hole on the course, the par-4 17th, dropping in a 5-footer for birdie. He finished with a birdie at 18 for 5-under, the exact number he had in mind for the victory. His 275 put him three strokes clear of Slipko. Silver finished in a four-way tie for third.

"Scott was focused all the way, we couldn't shake him," Slipko wrote. "Fred and I had a great day as did those in attendance. Two working guys from the area, to be in the last group, the final round, we were all winners that day. I'll never forget it."

Verplank came back in 1984 and 1985. He lost by two strokes to Canadian Amateur champion Danny Mijovic in 1984 and cruised to a six-stroke victory in 1985, threatening the course and tournament record of 12-under at one point. His consecutive 1-2-1 finishes are unmatched in Porter Cup history.

Verplank added the 1984 U.S. Amateur title to his resume and then stunned the golf world by winning the Western Open in 1985 against a field of pros, including Jim Thorpe of Buffalo. He beat Thorpe in a playoff, becoming the first amateur since Doug Sanders won the 1956 Canadian Open.

"I got a little trophy," he said, "but more importantly I got a three-year exemption on tour."

Years later when asked about that win, he said, "I didn't realize at the time it was such a big deal. But the significance of it is that it doesn't happen very often. … maybe three times dating back to the 50s. Looking back, it's pretty cool."

Slipko and Verplank crossed paths about 20 years ago, but not on the golf course.

"The last time I saw Scott Verplank was in Oklahoma City, at a PF Changs restaurant," Slipko wrote. "We rehashed the 83 PC, it meant a lot to him. Look what he did right after. Winner of U.S. Am, repeat winner at the PC, and most impressive, winning a PGA Tour event as an amateur. That may never be duplicated."

Verplank, 56, lives in Edmund, Oklahoma and plays on the Champions Tour. He and his wife, Kim, have a son and three daughters. His son, Scott, played in the Porter Cup several years ago.

Mike and his wife, Pam, live in Plano, Texas.

He resurrected what is now known as the Senior Porter Cup in 1994 after a 14-year hiatus and eventually realized his dream of a full-fledged event independent of the men's Porter Cup in 2008. Silver won all three senior divisions, the last one — the Legends — coming last September, a month before he died. His son David and Fred's longtime friend and club member P.J. Alterio will take the reins next year.

Bill McGrath is a former Gazette sports editor and author of the book, "Porter Cup Fifty Years." Contact him at scoreboard@gnnewspaper.com.