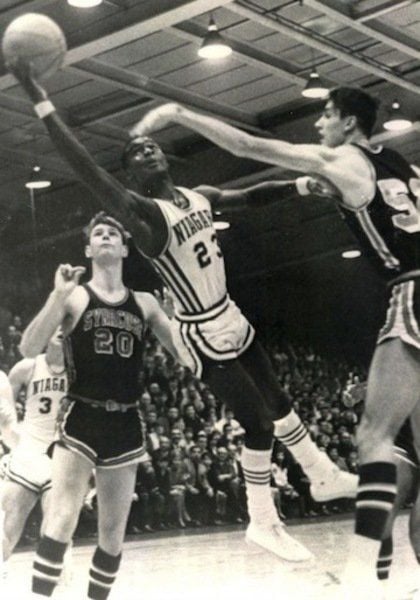 File photoIn this Dec. 7, 1968 Niagara Falls Gazette file photo, Niagara guard Calvin Murphy puts up a shot around two Syracuse players during a game at the then-Student Center in Lewiston. Murphy scored 68 points that night, at the time an NCAA record. 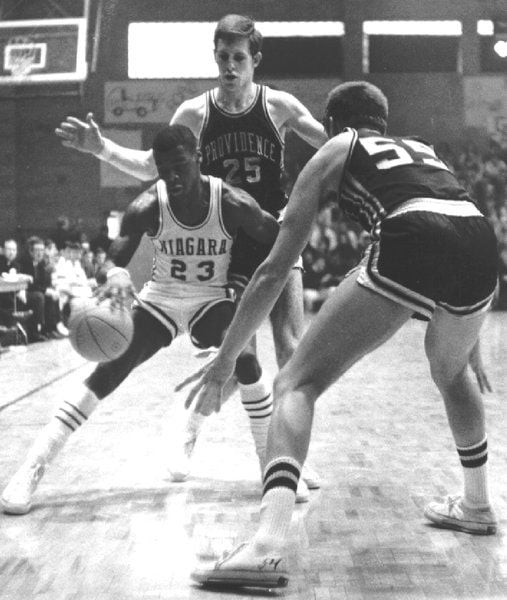 File photoIn this Dec. 7, 1968 Niagara Falls Gazette file photo, Niagara guard Calvin Murphy puts up a shot around two Syracuse players during a game at the then-Student Center in Lewiston. Murphy scored 68 points that night, at the time an NCAA record.

It's been almost 50 years since Calvin Murphy played his final game at Niagara University, leaving behind memories and stories for those who saw his extraordinary career unfold. In many ways, he remains the face of the men's basketball program, and he frequently returns to support his alma mater.

As a three-time consensus All-American, he set the all-time NU scoring record of 2,548 points in just three seasons, at a time when freshmen were ineligible for the varsity and there was no 3-point arc. He led Niagara to its first NCAA Tournament in 1970 when NU finished 17th in the final AP poll.

But of all his countless achievements, there was one that not only stood out at Niagara but garnered national attention. It happened 50 years ago Friday — Dec. 7, 1968. This is the game where the improbable happened, even for Calvin Murphy. He set an NCAA single-game scoring record of 68 points, which lasted only 14 months but still ranks third all-time against a Division I opponent.

In the years Calvin played at Niagara, there was one constant: Showtime. Fans crammed into the 3,200 bleacher seats at the Student Center (now the Gallagher Center) two hours before game time (there was a freshmen preliminary) to see No. 23's latest display of quickness, speed, ball-handling and shooting that would leave them exhilarated and defenders scrambling to stop him. He even put on a baton-twirling exhibition, something he also did at Bills games.

There was a bonus that night. He was expected to reach 1,000 career points in just the 27th game of his varsity career. Murphy needed 20 points and that was hardly a full night's work for the 5-foot-9 junior guard from Norwalk, Connecticut, who came into the game averaging 37.7 points in the previous 26 games of his career.

Niagara (2-0) was playing its first Division I opponent of the season, a relatively inexperienced Syracuse team led by 6-foot-11 Bill Smith. The Orange, coached by Roy Danforth, predecessor to Hall of Famer Jim Boeheim, knew what they were in for. Calvin scored 50 at Syracuse the previous season to set a record at musty-smelling Manley Field House.

It didn't take long for Murphy to reach 1,000 points. It came on a free throw, one of the 20 he would make, with 5:04 remaining in the first half and Niagara leading 38-34. The Rev. Kenneth Slattery, NU President, presented Calvin with the ball as Coach Frank Layden and the team gathered around him.

The ceremony seemed to energize him and over the last five minutes of the half, Calvin scored 14 more points for 34 going to the locker room. While he made barely half of his shots in the first half, he warmed up in the second, making 11 of 19.

"I wouldn't have scored 68 without my teammates setting me up," he said recently. "They allowed me to be the man. You might think some jealously might pop up. There was none of that. Everyone accepted their role."

Syracuse tried every defense it could muster to stop the endless barrage. Nothing worked.

In the 2003 book "Tales from the Syracuse Hardwood: A Collection of the Greatest Stories Ever Told," Syracuse Post-Standard columnist/author Bob Poliquin quoted former Orange player Bob Kouwe, who sounded like he was still awed by the performance more than 30 years later.

"We had Ernie Austin guard him. We had John Suder guard him. We had Ray Balukas guard him. I guarded him. But there was no way. None. He was the fastest human being you’ve ever seen. He could run faster dribbling than anybody could run without a ball, and he never mis-dribbled. So how do you cover that?

"We picked him up as soon as he crossed center court. We tried a box-and-one. We double-teamed him. We tripled-teamed him. ... But it was fruitless. There was no playing Calvin Murphy. It was a total loss even trying."

Murphy said he had no idea how many points he was scoring.

"I didn't think anything of it until it became national news," he said. "I was doing what I do. I found myself open a lot and my teammates were getting me the ball. I could do no wrong … It was like an out-of-body experience."

"There were three or four times when I was all over him," Kouwe continued in Poliquin's book. "I mean, he'd go up for a 25- or 30-foot jumper and I'd be blanketing him, with a hand in his face. And he just jumped straight up into the air, as high as he needed to go, and let fly with the most beautiful floaters you can imagine. And he hit nothing but net. I thought I did a pretty good job on Calvin that night. I really did. And he went for 68."

Aggressive defense only led to Murphy stepping up to the free throw line. He made 20 of 23. When he wasn't scoring, he set up his teammates for six baskets and he had six rebounds, more than any Syracuse player except Smith.

Niagara won 118-110 and Murphy's performance raised his season scoring average to 44 points per game, second to LSU star "Pistol Pete" Maravich. He made 24 of 46 shots, more than half of NU's 45 field goals.

"The biggest disappointment of that night was I fouled out," Murphy said with a laugh. "They called me for a third charging foul. I never touched the guy."

The Niagara Falls Gazette led the front page of Sunday's edition with a story headlined "Numbers Game: 68 and 1,000."

If Murphy's historic achievement wasn't memorable enough for him, he shared it with his mother, Ina, and his stepfather, Robert Miller, who came from Connecticut to see the game.

"Every time I see him, he comes up with something new," Ina told Gazette editor/reporter Cliff Spieler. It was the first time she had seen him play at Niagara since his varsity debut a year earlier, when Sports Illustrated was there to cover the occasion.

What that 68-point game also did, Murphy believes, was create a national scoring rivalry with Maravich. "I subconsciously wanted to keep up with 'Pistol Pete'," he said.

Fourteen months later, Maravich scored 69 against Alabama to reset the record. It didn't bother Calvin, he says now. "Actually no. It was a fun time in my life, playing basketball. I loved every second."

Late in his senior season, 1969-70, Murphy and the Purple Eagles were headed to the postseason. Calvin was hoping it would be the National Invitation Tournament, where he might go head-to-head with Maravich and LSU in Madison Square Garden.

Niagara ended up in the NCAA Tournament and Murphy didn't get to play against Maravich until he was with the San Diego (later Houston) Rockets and Maravich was with the Atlanta Hawks.

"We had a great time talking about our duel in college," Murphy said. "I can't tell people how great he was. I loved playing against him."

For Layden, Murphy's show came in his third game as head coach and gave him a 3-0 record. He told a reporter years later, "I remember driving home with my wife after Calvin gets 68 against Syracuse and saying, 'Hey, this is pretty easy.'"

Drafted 18th overall by the Rockets in 1970, Murphy played 13 seasons in the NBA and was inducted into the Naismith Memorial Basketball Hall of Fame in 1993. These days, living in Houston, he works with the Rockets in various positions including with the broadcast team.