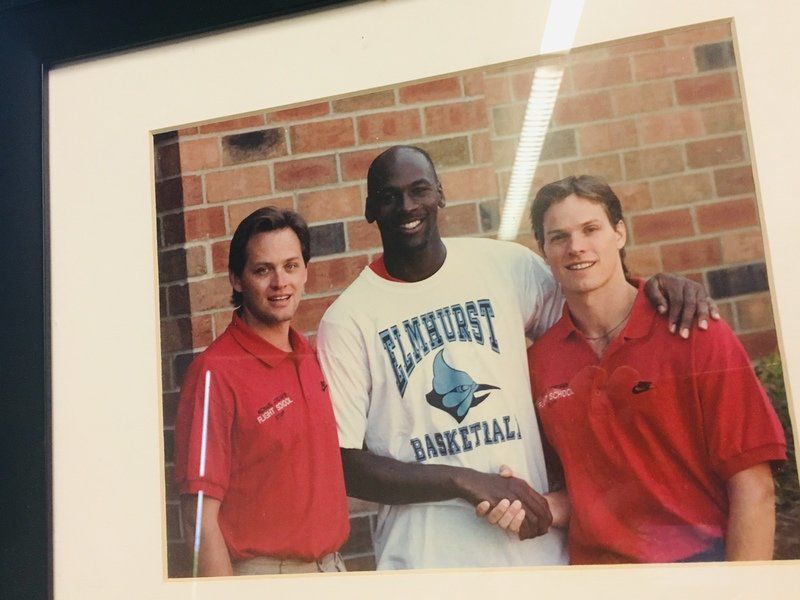 Jonah Bronstein/contributorIn this picture, which sits on UB men's basketball coach Jim Whitesell's desk, Jim (left) and his brother Sean pose with Michael Jordan after working a basketball camp in the late 1980s. 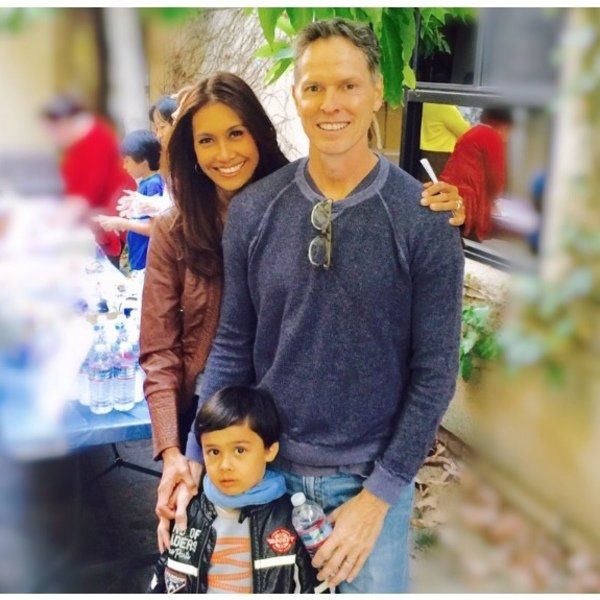 Jonah Bronstein/contributorIn this picture, which sits on UB men's basketball coach Jim Whitesell's desk, Jim (left) and his brother Sean pose with Michael Jordan after working a basketball camp in the late 1980s.

Wrapped around his left are two green bands Whitesell has worn every day for the past five years.

When Whitesell arrived at UB, those bands displayed names — his brother Sean, sister-in-law Maria, nephew Gus — a four-leaf clover and a yoga symbol, along with the Bible verse: With God all things are possible.

The words and emblems have faded away. The memories have not. The bands have held strong as Whitesell’s emotional connection with Sean, who died in December 2015 after being diagnosed 18 months earlier with glioblastoma, the most aggressive and deadly form of brain cancer, at age 52.

“I never take them off,” Whitesell said. “A lot of my family members still wear them. I have a whole stack of them at home and my wife says you might want to change them. I like the ones I have now.

“It’s a reminder of him, to keep him in my thoughts.”

Whitesell has supported the Coaches vs. Cancer initiative, a fundraising, awareness and advocacy collaboration between the National Association of Basketball Coaches and the American Cancer Society, since its 1993 inception, when he coached Division II Lewis University in suburban Chicago.

“The NABC has done a lot of good things for coaches,” said Whitesell, but the program that has led to $100 million being raised for the American Cancer Society “is the best thing the NABC has ever done.”

Being a Division I head coach raises the platform, Whitesell said. He participated in basketball clinics, golf outings and galas to support Coaches vs. Cancer while leading the Loyola-Chicago program from 2004-11. The cause took greater meaning when one of the seniors on Whitesell’s first Loyola team, Anthony Smith, as diagnosed with leukemia. Smith died in December 2008.

Whitesell has grieved his brother’s death since his first season as a UB assistant. Rising to become the Bulls head coach this year after Nate Oats’ departure for Alabama, Whitesell was eager to get involved with the Western New York section of the American Cancer Society in its invigorated effort to support Coaches vs. Cancer.

“Before, I knew it was important but it’s more personal now,” Whitesell said. “It hits closer to home.”

Whitesell hopes the Big 4 basketball community can come together and build its Coaches vs. Cancer initiatives to the level of the Philadelphia Big 5 and Jim Boeheim-led Syracuse efforts that annually raise several million collectively.

“Buffalo is such a cool city and I think people can really get behind this cause,” Whitesell said. “The Ride for Roswell is one of the most impressive things I’ve ever seen. I’m happy that the ground support is here with the American Cancer Society. Since we play each other most of the time, I think we can bring great awareness in conjunction with those games."

Sean Whitesell walked on the basketball team at Northern Iowa after a standout high school career. He maintained his love for the game while pursuing his passions, acting and screenwriting, out in Hollywood.

Jim was the hardwood outlier, with four of his five brothers going to work in the entertainment industry: Sean, director John Whitesell, writer Chris Whitesell, and agent Pat Whitesell.

Sean started with acting. He portrayed the cannibal prison inmate Donald Groves on the HBO series “Oz,” Dr. Eli Devilbiss on “Homicide: Life on the Street,” and appeared in the 1993 HBO movie “And the Band Played On.”

“He was always talking about writing a basketball show,” Jim said. “He wanted to do one called Majerus,” based on the colorful coach Jim worked with at St. Louis from 2011-13, “and he really liked the Sister Jean story when I was at Loyola.”

Of all the brothers, Sean showed the most interest in Jim’s hoops dreams. In the late 1980s, as a starving actor, they worked basketball camps together, including one with Michael Jordan.

“He really loved ball,” Jim said. “He’d watch our team and give me his notes all the time.”

An avid yogi, Sean “was probably in the best shape of all the brothers,” Jim said.

“But cancer doesn’t play any favorites.”

Jim was attending a basketball clinic at Army West Point in June 2014 when he received a frantic call from his mother informing him doctors found a tumor in Sean’s brain. The family gathered in a Los Angeles hospital waiting room when they learned the diagnosis of glioblastoma, which has a survival rate of less than 3%. In most cases, life expectancy is 12 to 15 months after diagnosis.

“We were stunned,” Jim said. “It was heartbreaking. It still is.”

“When we heard he had a tumor we thought, well just take it out,” Jim said. “We didn’t know the severity of it. That was a hard thing for us to try to accept. It was a really educational thing that I wouldn’t wish on anyone. It’s amazing to me with all these resources they still can’t make headway with some of these cancers.”

“Our team might have been the best team in the country that day,” Jim said. “We went on to lose in the first round of the NCAA tournament, but that day, our team played outstanding. All the stars aligned, as Steve Lavin put it. That’s kind of a neat basketball memory.”

Jim would be out of work a month later after St. John’s fired Lavin. He contemplated taking a year off.

“I told my wife I might just want to hang out and go out to California and spent a lot of time with my brother,” Jim said.

When Oats offered Whitesell a job at UB, his brother urged him to stay in the game.

“Sean thought it would be a great job,” Jim said. “He’d heard all these great things about Buffalo from Ton Fontana. He watched us in the tournament and really liked our guards.”

In early December, Oats allowed Whitesell to take a few days off to visit Sean in LA before UB went on the road to play a Duke team ranked No. 2 at the time.

“It was interesting for me because Duke was at the cutting edge of brain cancer research. I had written letters to a doctor that had made a lot of headway with brain cancer,” Jim said.

But Sean was more interested in talking about Duke basketball.

“He wanted to know the scouting report and get the whole thing down,” Jim said.

Two days after playing Duke, UB traveled to Iowa State, about an hour from the Whitesell family home in Iowa Falls.

Not long after, Sean entered hospice care. Jim went out to LA on Christmas Eve to say goodbye. On Dec. 28, cancer claimed another battle victory.

“Sean fought all the way until the end,” Jim said. “Experimental treatments and all those things. He was a survivor. His outlook was amazing to me, how he handled it on a daily basis.”

There was nothing Jim could do for his brother anymore. Except continue the fight.

“My dream now is that we can work to get that survival rate to go up higher in the next 10 to 20 years,” Jim said. “Everyone has someone they knew, a friend or family member, who has fought cancer.

“And the college basketball community has been at the forefront of fighting cancer.”