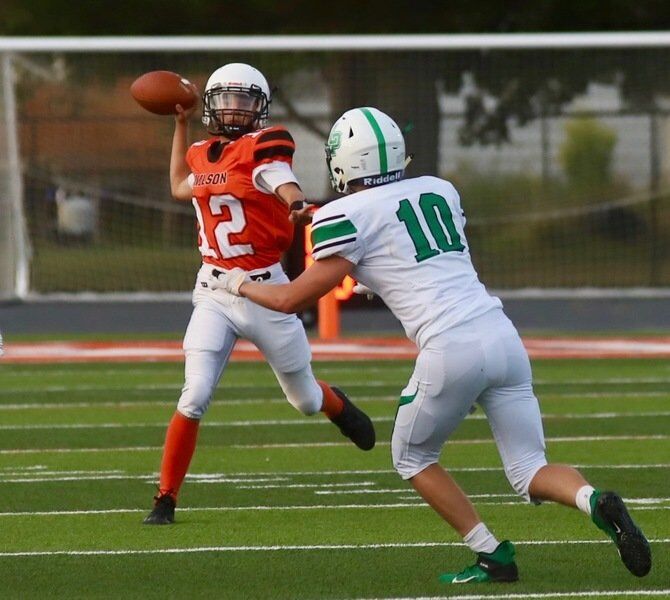 Wilson's Tyler Yousett (12) throws for Lewiston-Porter's Matt Barber (10) during a non-league game on Friday in Wilson. 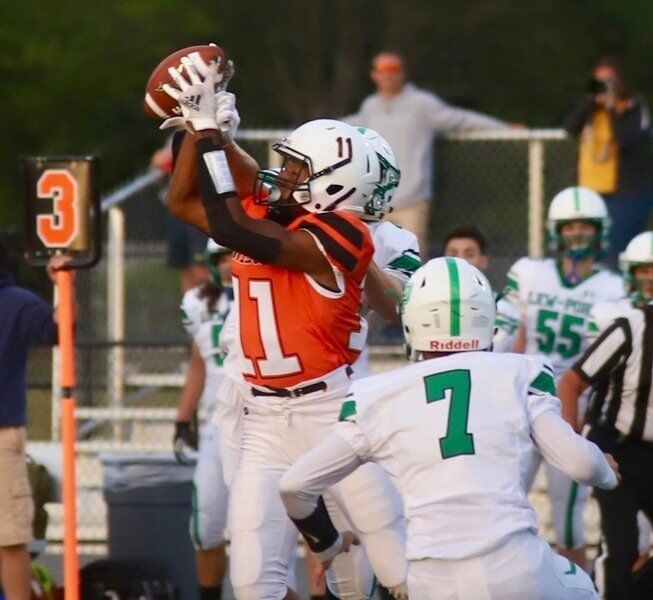 Wilson's Paul Smith (11) makes a catch in traffic during a game against Lewiston-Porter on Friday in Wilson.

Wilson's Tyler Yousett (12) throws for Lewiston-Porter's Matt Barber (10) during a non-league game on Friday in Wilson.

Wilson's Paul Smith (11) makes a catch in traffic during a game against Lewiston-Porter on Friday in Wilson.

WILSON — Grooving on their home turf to the disco soundtrack, the Lakemen reveled in the return of Friday Night Lights.

“It feels amazing,” senior quarterback Tyler Yousett said after Wilson won its fifth opener in six seasons, beating Lewiston-Porter 13-7 before an estimated crowd of 400 at Walter J. Hutchinson Stadium. “It’s been a long time because of Covid, but seeing the whole crowd out there support us meant everything.”

Yousett, who missed the opening game of Wilson’s spring season while recovering from shoulder surgery, completed 7 of 11 passes for 112 yards and a touchdown in Friday’s non-league victory.

“Having him back out here as our field general definitely helped,” Wilson coach Bill Atlas said. “If I could run the ball every play, I would. But sometimes we get behind the sticks and need to throw it, and Tyler made some great passes.”

Chris Dispenza, who had three receptions for 85 yards and a touchdown, said Yousett looked stronger than he did in the spring, “and he’s only going to get better.”

Luke Atlas rushed for 49 yards and a touchdown on 13 carries and Evan Wolfe added 38 yards on eight runs.

Xavior Fitzgibbon led the Wilson defense with six tackles and a sack. John Ernest, Evan Mahar, Dispenza and Atlas each made three tackles for the Lakemen, who carried a shutout late into the fourth quarter.

Sectional playoff participants in four straight seasons and Class C finalists in 2019, Wilson seeks to regain contender status after going 3-3 with a junior heavy squad in the spring.

“It’s fun and good to get out of the gate with a win,” Atlas said. “They are a bigger school, a B school, and it’s a good challenge for us. A good way to roll into the season.”

This was the first meeting between the northern Niagara County neighbors since 2017.

“Wilson is a really good football team,” Lew-Port coach Tim Shippy said. “We came out and played with them. We played tough. We played hard. We didn’t have a scrimmage, so this was like a scrimmage for us.”

Both teams moved the ball early on but struggled to finish drives. Dispenza opened the scoring when he took a slant pass 49 yards for a touchdown in the last minute of the first half.

“I’ve been working on the slants with Ty a lot,” Dispenza said. “We hit the slant and it was open and I just ran. That really picked up the momentum.”

“Chris is a great receiver,” Yousett said. “He’s really fast off the line. Coach Atlas called a great play and he beat the guy and took off.”

Atlas scored a 4-yard touchdown on Wilson’s first series of the third quarter to make it 13-0.

Lew-Port closed within a touchdown when quarterback Trent Reid scored on an 11-yard keeper with 3:51 remaining but the Lancers were unable to get the ball back again.

“That was huge,” Shippy said. “Our kids are young and getting that first taste of a touchdown will be big for us going forward.”

“This boosted our confidence a lot,” Yousett said. “We know what we have to do going into league play now.”