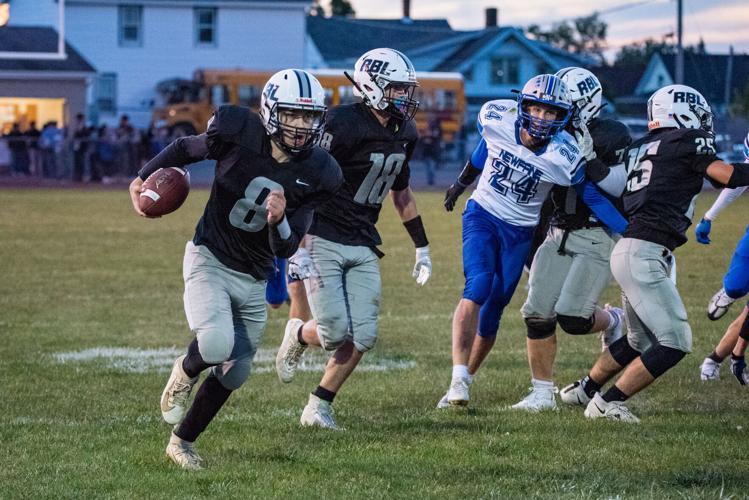 Roy-Hart/Barker/Lydonville’s Aiden Mescall (8) breaks loose for a touchdown run during the first quarter of a game against Newfane on Friday in Middleport. 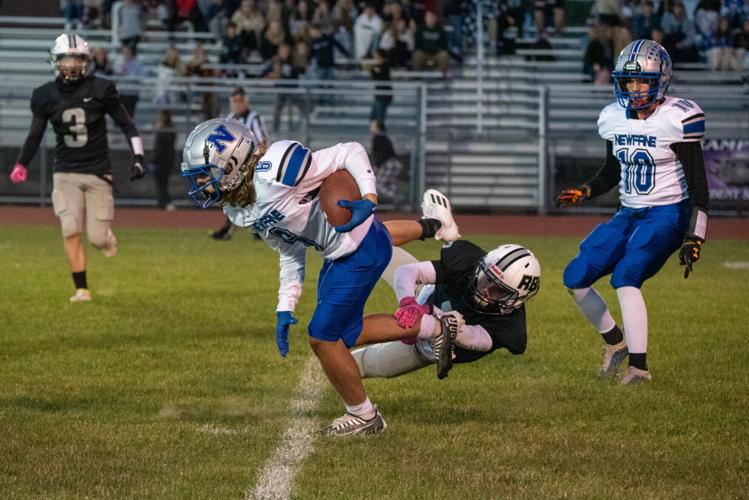 Newfane’s Aaron Watkins (6) is stripped up by Roy-Hart/Barker/Lyndonville’s Jacob Gould during a game Friday in Middleport.

Roy-Hart/Barker/Lydonville’s Aiden Mescall (8) breaks loose for a touchdown run during the first quarter of a game against Newfane on Friday in Middleport.

Newfane’s Aaron Watkins (6) is stripped up by Roy-Hart/Barker/Lyndonville’s Jacob Gould during a game Friday in Middleport.

MIDDLEPORT — There have been several incarnations of the football co-op between Royalton-Hartland and Barker, but none of them have been very successful.

Football was barely breathing for Roy-Hart, Barker and Lyndonville when they decided to merge in 2020. Midway through the third season, the Silverbacks are showing signs of life, especially after a 28-26 overtime win over Newfane on Friday.

RBL coach Joe Suhr knows his team shouldn’t have let the game go to overtime, but when Lucas Drees crossed the goal line for the tying touchdown and the subsequent game-winning two-point conversion, all the players saw was a win.

Wins haven’t come easily over the years, especially in league play. But RBL is 2-2 halfway through the year. Barker spent two seasons merged with Medina and Lydonville before the merger and the win over Newfane marked the first league win for any version of Roy-Hart 11-man football since beating Newfane on Sept. 26, 2014, snapping a streak of 31 consecutive losses.

“(Winning) strengthens us,” Suhr said. “It helps you so you don’t get rattled when things get tough or it gets tight. It really hardens you. Sometimes I think it’s better than a big win and not experiencing that. It takes a lot of grit.”

The game was a toss-up throughout, in part due to some RBL miscues. Newfane breezed down the field for a touchdown on its opening drive and the Silverbacks responded when it was their turn. They were driving again when a fumble halted momentum and the Panthers drove back to make it 14-6.

Trailing 20-14 in the fourth quarter, Newfane’s Ben Dickinson made a dazzling catch and run, only to fumble at the RBL 1-yard line. But under duress, RBL quarterback Trenton Muck — who had two rushing scores — heaved a pass over the middle that was intercepted by a diving Jonny Beiter.

The Panthers capitalized on one of two touchdown runs on the night by Brayden Walker, but missed the extra point. The Silverbacks took a big risk, going for it on fourth and 5, and Aiden Mescall was stopped at his own 44 with 1 minute, 29 seconds left.

Despite the misfortune, RBL didn’t cave. Newfane missed a 37-yard field goal to end regulation and Nate Snow scored his second rushing touchdown of the game to open overtime, but a fumbled snap allowed the RBL defense to pressure the conversion, leaving the door open to steal the game.

“I think we would have put our heads down (last year) and not keep trying to get back up again and push for that next play,” said Mescall, who had 164 yards and a touchdown on 22 attempts after having 21 yards on five carries for the entire season coming into the game.

RBL believes it would have lost a game with similar circumstances last season because it happened, to the same opponent and in the same location. A fumble allowed Newfane to score the game-winning touchdown in the waning seconds to win a 30-26 game in the season-ending Connors & Ferris Bowl.

One of the reasons the ending didn’t have a similar result this time is because RBL is a bigger and stronger team than it was previously. There’s still room for growth in football acumen and the understanding of situations, but it’s no longer a guarantee that every opponent is going to overpower the Silverbacks.

Going toe-to-toe with Class C powers like Medina and Lackawanna is still a ways off after losing the previous two weeks by a combined 86-18, but beating Newfane provides some confidence with three Class C North games remaining.

“We’re still a little young and we still like to shoot ourselves in the foot sometimes, but we’re learning,” Suhr said. “Sometimes we’re learning on the job. But it’s better than last year, where a lot of times it didn’t matter if it was smart football or dumb football, we weren’t able to be in a lot of those games.”